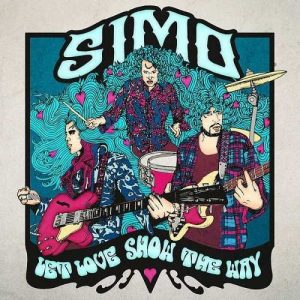 Let Love Show the Way is the newest album from Nashville trio and Joe Bonamassa-championed group Simo. “Stranger Blues” is the album’s introductory track that kicks off the lengthy LP with the sound of oscillating electronics before turning into a psychedelically tinged rock piece with a guitar line that easily recalls Ray Manzarek’s keyboard work with The Doors, specifically their track “Break on Through.” The album’s second track, “Two Timin’ Woman” modifies the established sound with stutter-scraping staccato on singing, strained strings before concluding with a cacophonous finish. “Can’t Say Her Name” imagines a woman with a brisk heart and a chameleon’s markings and parallels her changing identity with the ambivalent way in which the song’s speaker attempts to typify his feelings for an angel, a bitch, a savior, a trick, a thief, a dream, a vision, a criminal, and a friend – all of whom share the same wildly captivating flesh.

“I Lied” features both a guitar and drum line that are both extremely reminiscent of Stone Temple Pilots’ smash hit “Vasoline” and is overlaid with an only tangentially cogent voiceover. “Please” features an upbeat melody and an infectious guitar before moving into the next track, “Long May You Sail” by way of Jimi Hendrix’s “Foxy Lady” fade-out/fade-in segue. “Long May You Sail” introduces a Celtic-sounding guitar that lends a fair amount of post-chorus charm to this schizophrenic track with slow vocals and violent drums and guitar. “I’ll Always Be Around” begins with a sort of “Amazing Grace” bluegrass prelude before coalescing into a thundering instrumental intro that becomes suddenly and effectively silenced at a moment’s notice, a feature which no doubt highlights the dual nature of the speaker’s feelings. A delicately held note brings this song to a brief a cappella and a gentle close.

The album is briefly recharged by the upbeat thumper “Becky’s Last Occupation” before turning an eye towards groups such as The Grateful Dead and The Allman Brothers Band with the extended jam sequence in “I’d Rather Die in Vain;” the faltering guitar and the drums in the breakdown conjure up the ‘90s alternative scene once again with a bit of a nod to Bush’s “Comedown” before a piercing high note from the strings develops into a pattern of experimentation: finer-picking, soloing, tapping, and elements of jazz, classical, and grunge all present in this nearly ten minute-long track. “Today I Am Here” grants the listener a sonic respite with its soothing, acoustic flow that paints pictures of riverboats gliding their unhurried way under a firmament of twinkling stars through a golden cloud of fireflies.

The album’s title track, “Let Love Show the Way,” sees Simo pick up the psychedelic vibe again and use it to great effect in this that rises easily through the first verse before slowly coasting back down to earth by the song’s close. “Ain’t Doin’ Nothin’ is a nearly fourteen minute-long track that finds much of Simo’s familiar sound from “Stranger Blues” and “I’d Rather Die in Vain” taking their anticipated curtain call. The album ultimately closes with “Please Be With Me,” a homeward-tending ballad of missing belonging that finds asylum not in a town of memorized roads and faces, but in the heart of one who’s constant affection was the only worthwhile surprise.

Let Love Show the Way is a pleasing bit of music that will attract fans of jam bands and garage rock with its extended breakdowns and instrumental dabbling while also pleasing supporters of true-to-its-roots blues rock and acoustic musings on life, love, and memory.
McKinnie Sizemore