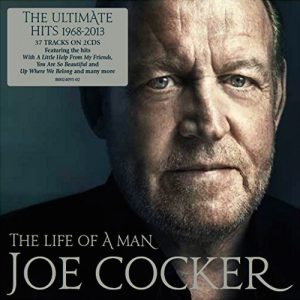 With the first anniversary of Joe Cocker’s death approaching, The Life Of A Man: The Ultimate Hits 1968-2013 – a two-CD, 36-track compilation – celebrates the hits and highlights of his wonderful career…

Billed as a ‘final and official posthumous’ album, this ‘Best Of’ retrospective showcases the husky-voiced British rock legend’s hits, key album tracks and live highlights from across six decades. Cocker released 22 studio albums, 10 live albums, 68 singles, so there was a wealth of golden material to choose from.

This two-CD set serves up tracks from his debut album, With A Little Help From My Friends – including the title song which went to number one in the UK in 1968, Cocker’s self-penned first single Marjorine, plus his cover of Traffic’s Feelin’ Alright – up to live performances from his 2013 tour. Along the way, enjoy other unmistakably Cocker covers, such as his versions of The Beatles’ She Came In Through The Bathroom Window, Leon Russell’s Delta Lady and George Harrison’s Something, plus, naturally, his smash-hit power ballad with Jennifer Warnes, Up Where We Belong.

Cocker always gave his carefully curated songs his own twist, a fact often publically acknowledged by the original writers. For instance, Paul McCartney said how especially pleased he was when With A Little Help From My Friends was given the Cocker signature stamp: “I remember him and Denny Cordell coming round to the studio in Savile Row and playing me what they’d recorded and it was just mind blowing, totally turned the song into a soul anthem and I was forever grateful to him for doing that.”

SDE’s American readers may be particularly interested by the inclusion in this compilation of the title track to Cocker’s final studio album Fire It Up and a live version of You Are So Beautiful (recorded in Cologne, Germany in February 2013), neither of which have previously been available Stateside. If they’re not enough for you, the Fire It Up album as a whole is also receiving its first-ever US release. A hit across Europe when it was first issued in 2012 – going platinum in Germany – it features songs by the likes of Keith Urban, Joss Stone and Marc Cohn, and includes three bonus tracks: album producer Matt Serletic’s The Last Road, Marc Cohn’s Walk Through the World With Me and Let Love Decide.

Alternatively, the other CD reissue is for Hymn For My Soul, Cocker’s 20th studio album that made the top 10 of the Christian Album chart on first release in 2007. This long player was produced by Ethan Johns, who plays several instruments on the album, and also features the talents of guest musicians such as Benmont Tench from Tom Petty & the Heartbreakers, guitar legend Albert Lee and drum icons Jim Keltner and James Gadson. The tracklist includes covers of songs by George Harrison (Beware Of The Darkness), Bob Dylan (Ring Them Bells) and Stevie Wonder’s (You Haven’t Done Nothin’).
BY JUSTYN BARNES, superdeluxeedition